The market capitalization of the obesity drug manufacturer Arena Pharmaceuticals, Inc. (NASDAQ:ARNA) has almost doubled in the past one month. The markets have fallen madly in love with this drug maker which boasts of sales of $76.8 million in the past 12 months. This huge build up in the investor interest in this stock has largely been driven by two key factors. The first factor is the better than expected results from its 3Q operations which got reported in first week of November. The firm reported less than expected net loss which stands at $17 million for the past 12 months.

The second and more impactful development has been the expansion in scope of  Arena Pharmaceuticals, Inc. (NASDAQ:ARNA) existing marketing agreement with Eisai Co. of Japan for its flag ship drug Belviq. Previously, the Japanese firm owned the marketing rights for the much sought after obesity drug Belviz for the whole of America continent.  Post the new understanding, Eisai Co gets to peddle this weight loss drug all over the globe except “South Korea, Taiwan, Australia, New Zealand, and Israel”. For the exclusive rights for the additional geographies, Arena would get paid a additional $60 million. More so on achievement of milestones as identified in the agreement, the drug maker also has the potential to earn close to $176 million over the next couple of years.

Arena Pharmaceuticals, Inc. (NASDAQ:ARNA) has managed to get the analysts rooting for its long term success as indicated by the chorus of ratings upgrades the stock has attracted post the Obesity drug announcement. The latest firm to affirm and upgrade Arena stock was WallachBeth. It has put a price target of $9 on the stock and has followed it up with a Buy rating.

In the past one month, stock of $1.42 billion market capped Arena Pharmaceuticals, Inc. (NASDAQ:ARNA) has been on fire. It has managed to post an awe inspiring 49.5% increase in its market value during trading in the last 30 days. Even during last week of trading the stock of this bio tech firm has posted close to 14% increase in its market value. This huge build up in the momentum of this stock has taken its share price well past its prior 52 week low price point of $4.05. Readers should note that the significant appreciation in the stock is of recent time frame and the stock had been struggling to post single digit appreciation week on week, till about one month back.

Competitive Scenario At The Browsers

The small cap drug maker has also outpaced its competition at the stock markets significantly in the past one month. As the chart below indicates, the drug maker with annual sales of $76 million has been the star outperformer among the bio tech firms last month. The only other drug firm other than Arena Pharmaceuticals, Inc. (NASDAQ:ARNA) which has managed to post a double digit growth in its valuation has been the $113 million market capped Athersys, Inc.(NASDAQ:ATHX) which has posted a respectable 20% upward movement in its share value. 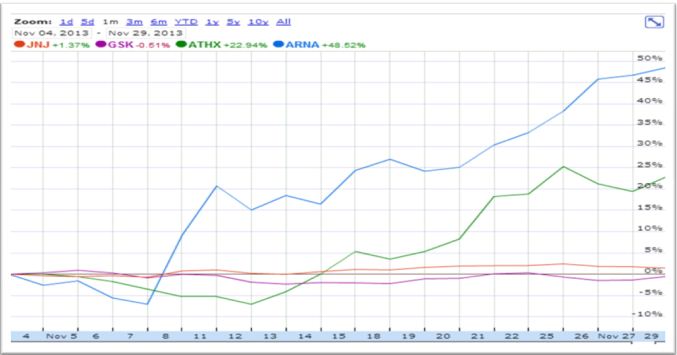 Even as Arena Pharmaceuticals, Inc. (NASDAQ:ARNA) goes all out to expand its market share of the obesity drug across the globe, new drugs which directly compete with its offerings are being developed by its completion at a fast pace. One such development is the drug Contrave which is being developed by $692 million market capped Orexigen Therapeutics, Inc. (NASDAQ:OREX). This weight loss drug has been sent up to FDA for final approval and if approved can seriously dent Arena’s market share.