Dallas, Texas 12/17/2013 (FINANCIALSTRENDS) – T-Mobile US Inc (NYSE:TMUS) definitely has some tough and hard thinking to do in the coming days.

As one of the smallest of the network carriers in the U.S. next only to Sprint  and way behind the Big Two – AT&T as well as Verizon- T-Mobile has several things to consider on the course ahead for itself.

Across the industry, data network speeds are the deciding parameter – the faster speeds finds more post-paid data plan subscriptions. This was proved by the recent onslaught Verizon has led in converting its networks to 4G. As soon as Verizon launched and sustained high speed data connectivity it has seen a surge in the number of subscribers, especially for post-paid users connection.

Though, there are complaints in the initial stages, that the speed promised was not consistent is parts of Seattle and neighboring areas, Verizon was aggressive in de-congesting its 3G as well as 2G sectors to bring faster and increased connectivity.

Incidentally, Verizon offered New York city and technology hub San Francisco one of the fastest speeds in the country, nearly 150 times faster than any of other rivals included.

AT&T was quick to pick up the trend and begin to offer higher –frequency connectivity and it too chose to go the de-congestion by re-allocating the spectrum it used for 2G as well as 3G connections, allowing its 4G customers – faster data transfer speeds.

However for T-Mobile, the scene is highly challenging. It has been in its own way, taking the torch to the fire, by offering data plans and more which will lure away subscribers from AT& T. Thanks to the additional funds it was paid, after the break-up of its deal with AT&T, T-Mobile US Inc (NYSE:TMUS) has seen a resurgence.

But, it appears the company has different ambitions.

T-Mobile and other smaller players such as Sprint lack the frequency –width to operate high-frequency services for the urban populace as well as the lower frequencies in the region of 700 MHz to operate rural area connectivity.

Additionally, the Federal Communications Commission has delayed the auctioning of new spectrum until the year 2015. This leaves smaller-sized players like T-Mobile limited opportunities but to look towards new deals – be it purchaseof spectrums from established players or sharing of services. FCC, is keen that the country remain a multiple-player area, with each of the carriers being allocated its fair deal of spectrum to operate across the country, smaller players like T-Mobile will continue to be in the negative.

Besides, T-Mobile is not averse to working a new deal or partnership with any of the other players, if FCC were to allow it forge such.

It has two positive deals that could offer it a better path of growth. 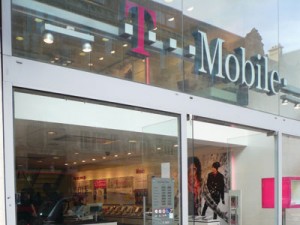 The first of the deals, will allow T-Mobile US Inc (NYSE:TMUS) to purchase unused blocks of spectrum, at a premium price from Verizon. This will allow TMUS an entry to parts it does not provide services thus far, while Verizon will fast-track its 4G connectivity dream.

The second and the most important deal before T-Mobile US Inc (NYSE:TMUS)) is the bid by Sprint to combine their subscriber base and offer a third-front to the competitive Big Two.

While the older of the two options would be void, if it considers the newer option, the time is now, how long before T-Mobile sees a change of name or will it go solo?

It is a question of time, before we know for how long and how far T-Mobile US Inc (NYSE:TMUS) will go?